On the footsteps of HS Materials Korea and China the concept is transmittable in India. Opening HSMI is a land mark in state of the art compounding facility is one of its kind having capacity of 24000 MT/Yr will be expanded to 30000 MT/yr in 2020 under one roof. The facilities spread over 14.7 Acres of land with covered area of 14,500 Sq M with fully own backup power.

The Supplies are made in Carbon Master Batch with accelerators chemicals for making FMB at customers end. There is flexibility of making compound as per Specifications provided Customer or as per the Recipe (Formulation) given by Customer.

The Size (Width and Thickness) of the Rubber Compound are Maintained to meet as per the Customer Specification and Processabiity.

The supplies are made in standard packing’s on Plastic / Steel / Corrugated Box wooden pallets for domestic supplies and in Sea Worthy packing for Export Deliveries. The compounds generally in Wigwag Rough Sheets/ Endless Strips or Granules in case of PVC / TPE.

Every batch has complete traceability records and test buttons and slab for verification. The Company also supplies CMB and accelerators are mixed at customers end.

The state of the art compounding technology of intermeshing intermixers ensures more homogeneous mixing compound as comparison to conventional kneader technology and open mills most Indian Rubber Companies have in house.

The production is totally computerized and automated including chemical weighing ensuring the consistency in compound properties in and between batches. Material flow is automated to a high degree too. The major part of the raw materials is transferred to hoppers at delivery. The material is weighed and transported directly to the kneader computer-controlled. Other raw materials, e.g. rubber, are weighed at the mixer. Mixing Mills are having stock Blenders as standard for heterogeneous compounding and Batch Off to ensure the online cooling and maturation.

A good rubber compound is one in which all the ingredients are very well dispersed. All the above mentioned ingredients are dispersed well with low shear stress and in a short time except Reinforcing fillers like Carbon Black and Precipitated silica which require a higher energy in terms of higher shear stress for a longer time. This is due to the small particle size and large surface area and high Structure.

Master batches are made in order to get good dispersion of Fillers in the rubber compound.

Since the heat generated during the internal mixing is very high, the dumping temperature is also very high, close to125*C to 150*C. Since this dump temperature is above the threshold temperature of "Activation" of the accelerators, the Master batch is always mixed with out Accelerators and curatives. The master batches are sheeted out and cooled to room temperature and allowed to mature for 24 Hours.

The Final Batch is prepared by mixing the Accelerators and the Curatives with The Master batch on a KNEADER along with TWO ROLL MIXING Mill (provided with a stock blender) and good cooling arrangement for the Rolls. After the initial band formation on the rolls, The Compound stock is passed over the blender rolls and reversed and rolled until thorough distribution is achieved. The purpose of mixing the Accelerators & Curative on a Mill is to get even DISTRIBUTION of the chemicals which is possible only in a mixing mill which gives a low shear Stress and high Shear rate. 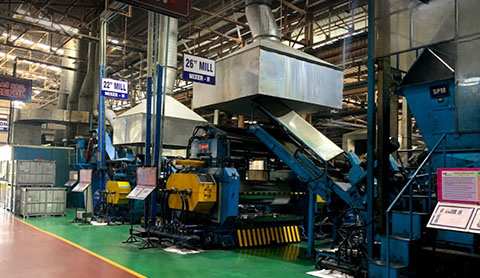 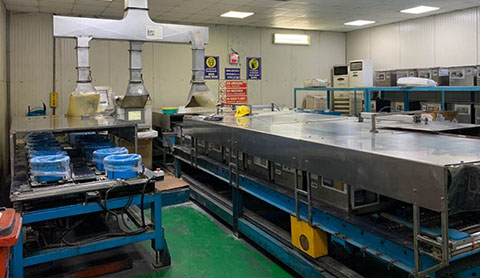 We are Validating and Uploading your Data.